These 3 Ancient African Kingdoms Changed The World – So Why Are They Not Taught In Classrooms?

by Asad
in Black History
0

In this system of white supremacy non-whites are taught that Africa and Africans had no civilization. They are also taught that what we built in our glorious past pales in comparison to that of Europeans.

Africa’s contribution to human civilization was white washed or erased. And as an African, your legacy was stolen from you when you were told that Black civilization is either inferior to that of non-white groups or nonexistent altogether.

Your intellectual birthright is stolen from you when non white groups know your truth, hide it from you, and then take credit for your ancestral achievements.

The result is that your esteem is destroyed, and not only do you come to believe the lies, you start to discredit your own people when they reveal our hidden colors to you.

Today, we strike another blow against this ignorance, this plagiarism, and this intellectual assault. If you are ready to reclaim your stolen legacy, keep reading and share this article to wake others up.

The Powerful African Kingdom of Ashanti

The Ashanti – also knowns as the Asante – Kingdom was impressive in both size, strength, and culture.

Like most African cultures, the Ashanti were run by the women. The so-called ‘rights of selection’ – the process of choosing leaders – were performed by the senior woman of the Kingdom. Only she could choose who could be the next Asantehene – or leader.

The legal system was also as complicated as those in existence today, and communications were just as effective.

The Ashanti invented the “talking drum” - a system of drums designed to communicate messages up to 200 miles (321.8 kilometers) away as fast as a telegraph could.

At its height, the Ashanti Army was 80,000 deep. Armament was primarily with firearms, but some historians hold that indigenous organization and leadership probably played a more crucial role in Ashanti successes.

From the 1600s and onward, European demand for gold and slaves on the coast, and Mande migrations from the north following the fall of the Songhai empire meant an explosion in trading activity in West Africa.

A series of divided clans rose and fell, all of which tried to control the trade routes from the rich Akan gold fields to the African coast.

To the south of the Akan gold fields, the rich and powerful states of Denkyira and Akwamu rose. By 1640, the Fante culture had settled on the coast and their states were beginning to be established. They became prominent in the slave trade with the Europeans.

These two states flourished despite wars and mutual invasions until the 1700s when they were conquered and absorbed by the last and the greatest Akan states – the Ashanti Empire.

The Ashanti empire began to rise as a superpower when they unified the clans of West Africa into one nation.

In 1699, the Ashanti King Osei Tutu (who reigned from 1689 – 1717) the various Ashanti clans began to expand from the Ashanti heartland around the trading center of Kumasi. In 1701, they conquered the state of Denkyira.

A period of great Ashanti expansion occurred during Okpu Ware’s reign (1717-1750). Between 1720 and 1735 , a new state – Akim – rose up to control Akwamu’s territories. Ashanti conquered Akwamu and Akim in 1742, and followed with more conquests in the north, taking Gonja, Dagomba, and Nanumumba by 1750.

Thus, by 1800, the Ashanti Empire had come to include much of modern-day Ghana, and parts of Togo and the Ivory Coast.

The 1800s were marked by commercial rivalry between the Fante states, their ally Britain, and the Ashanti. The objective was to gain control of the valuable trade routes from the interior of Africa out to the coast.

In 1824, the British became increasingly more nervous about Ashanti power. They launched an attack on the empire under the pretense of “liberating the Fante states”. This was the first of many Anglo-Asante Wars.

While the Asante won the first war with their impressive military might, their victory was not to be repeated.

The British brought all the might and manipulation they could muster upon the Ashanti. The Brits gathered up as many Fande slaves as they could and sent them screaming into Ashanti territories.

From 1824 onward, British gunships and slaves were thrown into the bloody fray against the Ashanti until the empire finally collapsed and became a British possession in 1902.

The Mysterious African Kingdom of Nok

The Nok culture is the oldest in West Africa. Radiocarbon testings have dated Nok sites at between 2,000 and 2,500 years old.

It’s likely that the original people of Nok migrated into today’s Nigeria following the climate change disaster, called the 5.9 kiloyear event, that turned the Sahara into a desert. 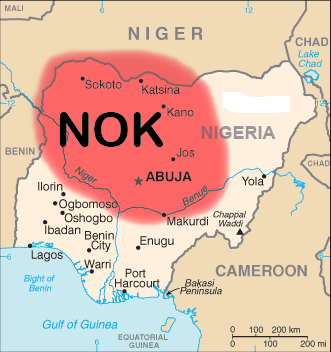 The mysterious Nok culture appeared in Nigeria around 1000 B.C. and vanished under unknown circumstances around 500 AD in the region of West Africa. They left behind a strange and unprecedented type of terra-cotta art that was both distinctly African, but unique in style and technique.

Archaeologists assume the Kingdom of Nok disappeared when Islam came on the scene killing, expelling, and assimilating the original people. Others assume that climate change continued to push them into the South of Africa and across the seas.

The similarity between the art of the Mayan civilization and the Nok (see the gallery below) and the rise of the Mayan culture right behind the fall of the Nok culture leaves us speculating until more scientific evidence can be uncovered.

The Aksumite Empire: Daughter of Kemet

The Aksumite Empire arose as a direct result of the fall of the last Ptolemaic dynasty at the beginning of the first millennium . Those members of Egypt fled south to conquer the Kingdom of Kush and formed Aksum.

Under Emperor Ezana (fl 320–360), Axum became the first major empire to convert to Christianity, and was named by Mani (216–276) as one of the four great powers of his time along with Persia, Rome, and China. Axum’s ancient capital is found in northern Ethiopia.

The Aksumite Empire used the name “Ethiopia” as early as the 4th century, and is also the alleged resting place of the Ark of the Covenant (in the 16th century Cathedral of St. Mary of Zion) and the purported home of the Queen of Sheba.

Axum was the first state ever to use the image of the cross on its coins, in around 300 A.D. Axum was a crucial participant in international trade, sending gold and ivory as far away as China and Java and as far North as modern-day France.

Like many other African kingdoms, Axum began its decline when Islam arrived, but did not fall completely. Axum has remained Christian up to today, and the Axumites live on in the blood lines of today’s Ethiopians and Eritreans.

A Celebration of Genocide: The Untold Truth About Thanksgiving

Why The Birth Of South Sudan Was 5,000 Years In The Making

Know your history, know yourself! These are the best Black History Books for serious students that cover African Prehistory up...