Many Black Americans are now aware of the crimes of J. Marion Simms, the so-called Father of Modern Gynecology. Sims routinely experimented on his female slaves without anesthesia. Back then, researchers believed Blacks were sub-human creatures who didn’t feel pain. In a chilling account:

“Each naked anaesthetized slave woman had to be forcibly restrained by the other physicians through her shrieks of agony as Sims determinedly sliced, then sutured her genitalia. The other doctors fled when they could bear the scene no longer.”

The resulting breakthroughs he uncovered secured his seat as president of the American Medical Association, and have generated trillions of dollars since.

If you believe that medical experimentation on Black bodies ended with the Civil War, you would be wrong.

If you have ever suffered with acne, chances are you were prescribed Retin-A – a synthetic form of Vitamin A. The wildly popular drug was created by Dr. Albert M. Kligman, with sales approximately $290 million for the year ending November 2015.

Dr. Kligman may have never developed the drug where it not for the help of more than 30 pharmaceutical companies that funded his research and Holmesburg Prison in Philadelphia.

According to Acres of Skin: Human Experiments at Holmesburg Prison, from 1951 to 1974, inmates were used as lab rats for his experiments. Black prisoners were exposed to radioactive, hallucinogenic and toxic materials on behalf of more than 30 pharmaceutical companies and several government agencies. In some experiments, prisoners were deliberately exposed to pathogens responsible for skin infections, including the herpes virus, staphylococcus bacteria and the athlete’s foot fungus.

The must-read book Medical Apartheid further illustrates the extent of modern medical experimentation on Blacks with The Tuskegee Study of Untreated Syphilis in the Negro Male. 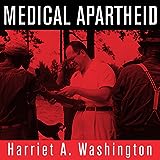 430 Reviews
Medical Apartheid: The Dark History of Medical Experimentation on Black Americans from Colonial Times to the Present
Get this Audiobook plus a second, free with audible trial
$39.95 −$4.99 $34.96
Audible Details Free With Audible Trial

The study was conducted between 1932 and 1972 in Macon County, Alabama, and it tracked 399 poor and mostly illiterate Black sharecroppers who were diagnosed with syphilis. The study subjects were deceived into believing that they were being treated, when in fact the documented intentions of those leading the study was to allow the disease to run its course, which often meant a very painful death.

By 1947 penicillin was recognized as a cure for syphilis, but study clinicians denied the antibiotic to subjects and instead gave them a fake. As the author notes, the racism that made something like the Tuskegee Syphilis Study possible was systemic and started at the top of the medical hierarchy with then U.S. Surgeon General, Thomas Parran, Jr. Even when presented with the penicillin cure, Parran opted to continue experimentation with the Black men of Macon County. By his assessment, their lives were less valuable than knowledge about syphilis.

These are just three of thousands of examples of cases of medical experimentation on Black bodies. Remember that the torture and cruel, inhuman or degrading treatment described above is considered a gross violation of human rights. And while we cant be sure how many of our people have been subjected to medical experimentation, its prevalence presents a strong argument for Black reparations.

Click the tab below to see the next reason!

More From: The 9 Areas Of Life

I Am Already A Subscriber.
RBG Flag Day Is August 13 - Get FREE Shipping On All Flags All Month
Click Me