“Those who run our prisons and jails seem determined to keep those who are locked up and locked out as ignorant as possible about the racial, social, and political forces that have turned this country into the most punitive nation on Earth” — Michelle Alexander

The New Jersey Department of Corrections recently came under fire after ACLU attorneys exposed their unconstitutional ban on The New Jim Crow — an award winning book that blew the lid off of America’s prison-industrial complex. 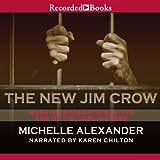 94 Reviews
The New Jim Crow: Mass Incarceration in the Age of Colorblindness
Get this Audiobook plus a second, free with audible trial
$31.49 −$4.54 $26.95
Audible Details Free With Audible Trial

When one understands the nature of the banned book, it becomes clear why a state with the worst racial disparity in incarceration rates in the entire nation would want the book suppressed.

The New Jim Crow exposes a caste-like system in the United States that is maintained by the prison industry that has resulted in millions of African Americans being prosecuted, incarcerated, and locked into a permanent second-class status.

Here are some facts presented in the book that threaten the unchecked exploitation of people of color:

Fundamentally, The New Jim Crow speaks to the use of prosecution as a weapon of white supremacy and a solution to ‘the Negro problem’ presented in the face of the abolition of slavery.

White abolitionists and slave owners alike raised the question of what was to be done with the hundreds of thousands of Black men, women, and children if and when they were set free.

Some white abolitionists advocated full naturalization as American citizens, or sending the former slaves back to Africa. To the effect of the latter, the Republic of Liberia was established in 1822 with a promise of 25 acres of free land for each immigrant family and 10 acres for a single adult who came to the Black Republic.

But other whites had no desire to emancipate the Negro -  let alone grant Black reparations – fearing it would disrupt the economic and social order they had grown accustomed to. Any economic and political gains made by Blacks were met with resentment and violence. Lynchings were most common in small and middle-sized towns where blacks often were economic competitors to the local whites.

When Jim Crow laws were officially wiped off the books with the 1964 Civil Rights Act, white supremacist tactics adapted. While it was no longer socially permissible to use race explicitly as a justification for social contempt, discrimination on the basis of criminal background in the name of public safety would give white supremacists the back door needed to maintain the Black-White caste system.

Using ‘public safety’ and ‘law and order’ as a campaign platform, Blacks were painted as criminal elements within society setting them up as political targets. This gave birth to the infamous ‘Southern Strategy’ — a political tactic designed by American Republicans to increase political support among white voters in the South by appealing to racism against African Americans.

Using racist code words, Richard Nixon ran his 1968 campaign on “law and order”. His strategy would remain standard operating procedures for Republicans through the election of Ronald Reagan who would advance the Southern Strategy by field testing more venomous coded language. ‘Dog-whistles’ like ‘welfare queens’,’states rights’, and ‘affirmative action’ would sound race neutral to Blacks and others, but would speak to the bigotry and fears of white supremacists.

Though Reagan did not overtly mention the race of the welfare recipient, the unstated impression in whites’ minds were black people and Reagan’s rhetoric resonated with Southern white perceptions of black people.

With the image of the Black criminal and miscreant permanently embedded in America’s subconscious, the environment was ripe for blood letting and mass incarceration. Thus, the War on Drugs was expanded with the election of Ronald Reagan in 1980. The number of people behind bars for nonviolent drug law offenses increased from 50,000 in 1980 to over 400,000 by 1997.

Under the war on drugs police were given license to use murder and blanket policies like ‘stop-and-frisk’ to herd Black faces into jails. Los Angeles Police Chief Daryl Gates was applauded for making the statement that “casual drug users should be taken out and shot”.

In courthouses, most African-Americans were denied justice with unequal or excessive sentences. Some were railroaded into plea deals that would make them lifetime felons.

But under both circumstances, the result was the same: and individual who was unemployable, unable to participate in the political process, and denied their right to life, liberty, and the pursuit of happiness.

According to every statistic that we have available, Black American men are the most incarcerated group of people in the world. With the loss of a second stream of income, Black women are forced to both spend more on necessities like childcare while having less available for savings and wealth accumulation. The staggering loss of the earnings capacity of Black men at the height of their lifetime earning potential presents a strong argument for Black reparations from the government that engineered the dynamic that led to that loss in the first place.

Click the tab below to see the next reason!

More From: The 9 Areas Of Life

I Am Already A Subscriber.
RBG Flag Day Is August 13 - Get FREE Shipping On All Flags All Month
Click Me