We are now seeing the results of strategies used to destroy the Black community that were initiated decades ago.

In places like Sao Tome and Principe, a Creole buffer class was created by the Portuguese to control the indigenous Blacks that worked the islands.

And in Brazil, European male immigrants were subsidized by the government to lighten the population – an official government eugenics policy known as blanquieamento.

Our Ancestors saw the privileges bestowed on lighter-skinned Blacks. And Bombarded by messages that reinforced the supremacy of European standards of beauty, more of our Ancestors began to rationalize miscegenation – the mixing of the races – as a solution to improving their social standing – a practice that continues to this day.

Read Also: Why Pregnant Women Are Bleaching Their Unborn Babies In Ghana

Some rationalize interracial dating as a love shared between two colorblind individuals. Others suggest it is no one else’s right or concern who others date, marry, and have children with.

While it is true that there are circumstances where love is blind, the fact of the matter is that human beings are motivated not primarily by love but by fear of loss, exclusion, and vulnerability.

And the actions of one member of a group have direct implications on the group as a whole. Take the story of Jason Pope.

Personal Decisions with Group Implications – The Story of “DJ Kidd”

On December 4, 2011, two girls aged 13 and 16 walked into a hospital and told doctors they had unprotected sex with a white man who had given them marijuana and money in exchange for sex. They were afraid that they had contracted diseases. They were right to go straight to the hospital.

Because the victims were underage, we dont know the outcome of their visit. But we do know that the rapist got away. Deputies knew who he was, and they knew he was 34 years old – but closed the case.

Six years later, a young Black 16 year old called deputies and threatened to commit suicide. She was sick of being blackmailed by a white rapist who had been blackmailing her into performing sex acts. She also told police that he repeatedly paid 15 and 16-year-old girls for sex and filmed the encounters. She went on to say he recruited girls by handing flyers out promoting his DJ work and then bribed them.

Still, “DJ Kidd” was never sent to prison. He served jail time, but was released. After his release, he became a DJ. His predatory behavior became well known in the community. Still, Black women threw themselves at him.

He openly bragged about his ‘body count’ on Facebook and posted images of many of the Black women. Jason Pope knew exactly who to target and why.

Little did they all know that Jason Pope was HIV positive.

If we exclude the children who were raped, Jason Pope had sex with between 400 and 600 Black women. These are women who made personal decisions that were likely influenced by their psychological disposition to interracial sex. And because of that decision, many of them were exposed to or contracted a disease that has disproportionately devastated our community for decades.

This story illustrates how a personal and private decision on the part of Black girls and women – to have unprotected sex with a white man – can have devastating consequences for the entire group.

The Psychosis of Black Self-hatred

The evolution of miscegenation from forced rape, to biracial buffer classes and ultimately to a desirable practice has caused a psychosis so deep that other Black’s are encouraging members of their community to participate in their own destruction.

To illustrate, in his book Is Marriage for White People? How the African American Marriage Decline Affects Everyone, Banks says the most obvious solution is for black women to marry outside their race.

Here is an excerpt from the U.K.’s Daily Mail article:

Black women are surging ahead of black men both socially and economically, leading to a ‘relationship crisis’, says a professor of family law.

According to Ralph Richard Banks, as black men fall behind in education and income, they become less compatible with women of the same race, leading to black females becoming the ‘most unmarried’ group in American society.

Banks cites figures claiming around one in ten black men in their early thirties are in prison and that two black women graduate from college for every black man, elevating the women into the middle classes, while the men remain in the lower classes.

As a result, says Banks, many black women ‘marry down’, with the result that two out of every three black marriages failing, around twice the rate of white marriages, The Economist reported.

The Stanford professor claims due to this ‘man shortage’ black women are half as likely as white women to be married and three times as likely never to marry. 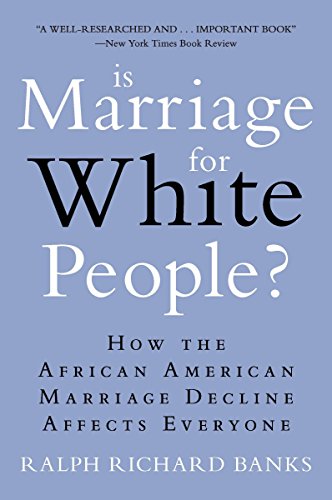 Is Marriage for White People?: How the African American Marriage Decline Affects Everyone
$17.00
Add To Cart

In an interview with Nightline, Banks claimed sixty years ago Black marriages and families were ‘as stable as white families’ and that the decline comes as ‘Black women have moved ahead, black men have fallen behind’.

Terming the phenomena as a ‘social catastrophe’ for black men, he added: ‘Imprisonment numbers, unemployment numbers, under-performance academically, these are crisis not just for African-Americans, but for the nation.

‘Many women would do well to expand their options in the same way people of other races have, and look beyond Black men in their search for a partner.

‘Black women are the most segregated group in our society when it comes to relationships.’

Read Also: The Truth Behind White Supremacy And Interracial Dating

According to the author, the solutions to the problem that Black women are facing with Black men is to abandon Black men and date outside of the race.

His only assertion to Black women is “Either marry down or marry white.”

Divide and conquer is one of the oldest strategies in warfare – and nowhere is that strategy working more effectively than in Black relationships.

Whether you agree or disagree, the comments are open. Share your thoughts below.