His dream was to turn Ghana into a modern industrial utopia – a society shaped by the power of science that would serve as a model for the rest of the African continent.

At the heart of his plan was the Volta Dam, a hydroelectric power plant that would provide Ghana with all the cheap power that it would need to initiate an industrial revolution.

In 1935 Kwame Nkruma left Ghana for the United States as a student, receiving a BA from Lincoln University, Pennsylvania in 1939. During that time, he was elected president of the African Students Organization of America and Canada. He was also exposed to the philosophy and teachings of Marcus Garvey, whom he would later credit with teaching him ‘how an underground movement worked’.

With the threat of uprisings abroad and financial crisis at home, Britain reluctantly set Ghana free on March 6, 1957. Nkrumah easily won election as the country’s first President, and he chose a flag with the Black star – inspired by Marcus Garvey’s Black Star Line – at its center to represent the new nation.

An entire documentary was produced that shed light on how the Volta Dam became Nkrumah’s undoing.

If Ghana was to become a modern industrial nation, it needed both industry and the power to fuel that industry and provide the continent with its first industrial revolution. The Volta dam was originally the brain child of Britain, but the colonial power was shrinking from the world stage and in doing so, began to withdraw its financial and project support from its former colonies.

During his campaign, Nkrumah’s platform was founded on the idea of modernization, but without funding for the Volta river project, there was no way that dream could become a reality.

Nkrumah set back out for America to sell the project to then President Eisenhower who took an immediate interest. Ghana at the time was literate, wealthy (as a result of its already profitable cocoa exports, and made a great business prospect for America. And the benefits to America as a young world superpower were two-fold:

President Eisenhower contacted California based Kaiser Aluminum, the world’s largest aluminum manufacturer, to exploit the opportunity and fund the project. The assumption that America would mine Ghana’s bauxite and use the Volta dam’s electricity meant two new large income streams and industries that would assure Nkrumah’s dream of an industrial revolution.

However, Kaiser Aluminum had different plans. They would only use Ghana’s cheap electricity – importing aluminum ore from other places in the world, and then exporting the aluminum back to America. The thought was that if the operation became too profitable, Nkrumah could nationalize the dam project and cut America out completely.

Nkrumah was crushed. The aluminum industry would have done for Ghana what the steel industry had done for the United States. Nkrumah ultimately had to agree to America’s terms if he wanted the dam to be built, but as an additional stipulation, he had to raise $30 million on his own.

He sought help from the World Bank, an operation initially set up to fund the recovery effort in post WWII Europe, but which later became a source of funding for the rest of the world. Nkrumah’s young new country was now indebted to the World Bank, and the dam became a leash by which the United States could control Nkrumah and exploit the country.

The exploitation of Ghana went into full swing; it became a haven for American and European industrialists who were interested in taking advantage of the country’s desire to modernize. White corporations would repeatedly dupe officials into purchasing whatever could be sold, no matter how inappropriate (a Belgian company sold the country snow plows… Yea, snow plows. In Africa).

The Volta Dam Was Completed On January 22, 1966. One Month Later, Nkrumah Was Overthrown By A CIA Backed Coup.

On March 11, 1965, almost a year before the coup, William P. Mahoney, the U.S. ambassador to Ghana, participated in a candid discussion in Washington, D.C., with CIA Director John A. McCone and the deputy chief of the CIA’s Africa division, whose name has been withheld. Significantly, the Africa division was part of the CIA’s directorate of plans (AKA Department of Dirty Tricks) through which the government pursued its covert policies.

According to the record of their meeting (Document 251), topic one was the “Coup d’état Plot, Ghana.” While Mahoney was satisfied that popular opinion was running strongly against Nkrumah and the economy of the country was in a precarious state, he was not convinced that the coup d’état, now being planned by Acting Police Commissioner Harlley and Generals Otu and Ankrah, would necessarily take place. However, he predicted that one way or another Nkrumah would be out within a year. Revealing the depth of embassy knowledge of the plot, Mahoney referred to a recent report which mentioned that the top coup conspirators were scheduled to meet on 10 March at which time they would determine the timing of the coup.

After the coup, Komer wrote a congratulatory assessment to President Eisenhower on March 12, 1966 (Document 260). “The coup in Ghana is another example of a fortuitous windfall. Nkrumah was doing more to undermine our interests than any other black African. In reaction to his strongly pro-Communist leanings, the new military regime is almost pathetically pro-Western.”

John Stockwell, a CIA officer in Africa at the time made the following statement:

“Howard Bane, who was the CIA Station Chief in Accra, engineered the overthrow of Kwame Nkrumah. Inside the CIA it was quite clear. Howard Bane got a double promotion, and was awarded the Intelligence Star for the overthrow of Kwame. The magic of it was that Howard Bane had enough imagination and drive to run this operation without ever documenting what he was doing and there wasn’t one shred of paper that was generated that would name the CIA hierarchy as being responsible.“

But in this age of information and Wikileaks, we now know the CIA ties to the destruction of Dr. Kwame Nkrumah ran deep.

John Stockwell elaborated on the coup in his memoir, In Search of Enemies: A CIA Story: 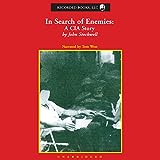 “The Accra station was encouraged by CIA headquarters to maintain contact with dissidents of the Ghanaian army for the purpose of gathering intelligence on their activities. It was given a generous budget, and maintained intimate contact with the plotters as a coup was hatched. So close was the station’s involvement that it was able to coordinate the recovery of some classified Soviet military equipment by the United States as the coup took place.”

According to Stockwell, Banes’ sense of initiative knew no bounds. The station even proposed to headquarters through back channels that a squad be on hand at the moment of the coup to storm the [Communist] Chinese embassy, kill everyone inside, steal their secret records, and blow up the building to cover the facts.

The Destruction Of Ghana

After the coup, the once wealthy nation of Ghana was milked dry. Kwame fled in exile to Conakry, Guinea – never to return to his home country. After 19 years of prosperity under Nkrumah, Ghana slid back into the dark ages.

After the coup, the Kaiser Dam project flourished, continuing to make payments to the World Bank and continuing to yield dividends to its parent corporation. The people of Ghana saw almost none of the benefit. Instead, the people got one military coup after another (7 total). In the 1950s, the world celebrated Nkrumah and Ghana. After the coup, the American propaganda machine painted the country and its leader as corrupt, savage, and unstable.

Kwame Nkrumah was called “the Communist Messiah” and Africa was said to be “unable to handle the pressures of modern industrialization. Kwame Nkruma’s organization was hijacked by the United Nations, and is now a tool used to expand the program of African exploitation.

But even in exile, Nkrumah continued to write and inspire Pan-Africanists. In Challenge of the Congo he wrote that the political economic situation in the world is one in which a tiny minority of the people grower “richer and richer, while the rest grow poorer and poorer” and elaborated by saying that the situation required world socialism as it was the only remedy, for “as long as capitalism and imperialism go unchecked there will always be exploitation, and an ever-widening gap between the haves and the have-nots, and all the evils of imperialism and neo-colonialism which breed and sustain wars.”

Dr. Kwame Nkrumah died of skin cancer in April 1972. He was 62 years old. He was survived by Gokeh, Samia Yarba (who recieved the 2006 European Parliament Award for Journalism), and Sekou Ritz Nkrumah.

Nkrumah was buried in a tomb in the village of his birth, Nkroful, Ghana. While the tomb remains in Nkroful, his remains were transferred to a large national memorial tomb and park in Accra (shown above).

Kwame Nkrumah was a visionary upon whom the hopes and dreams of the diaspora rested. Over his lifetime, Nkrumah was awarded honorary doctorates by Lincoln University, Moscow State University; Cairo University in Cairo, Egypt; Jagiellonian University in Kraków, Poland; Humboldt University in the former East Berlin; and many other universities. In 2000, he was voted Africa’s man of the millennium.

Ultimately, Kwame Nkrumah fell victim to the economic hitmen of the United States of America, capitalism, and the same program devoted to the destruction of the Black race that is still in existence today.

Handbook of Revolutionary Warfare
$21.95
Add To Cart Or Save For Later

Ghana: The Autobiography of Kwame Nkrumah
$88.65
Add To Cart Or Save For Later
Sale

Neo-Colonialism : The Last Stage of Imperialism
$34.65
Add To Cart Or Save For Later

Class Struggle In Africa
$17.90
Add To Cart Or Save For Later

Forward Ever. Kwame Nkrumah: A Biography
$5.95
Add To Cart Or Save For Later

5 Of The Best Dr. Sebi Approved Sea Moss Recipes Of All Time

The Ultimate Guide To Starting An African American Investment Club

The Twelve Jewels of Islam