One Language For One People: The 3 Best Ways To Learn Swahili Online For Beginners

by Asad
in Pan African Studies
1

I have written that one of the biggest barriers to African unity is our language barrier.

Thanks to colonization, Africans are divided into English, French, Portuguese, Creole, and Indigenous language speakers.

But when we look at other cultures that are thriving, we see that one of the foundations of their success is that all members of that culture speak the same language.

Before China became the oldest empire still in existence, its early Emperors unified its people using language. And before Islam dominated the African continent, its culture – Arabism – demanded all members speak Arabic.

But when we look at the African diaspora, we see English speakers at war with French speakers (Cameroon). We see Portuguese speaking Brazilians struggling to express solidarity with Xhosa tribesmen in Southern Africa. And we see Black men and women enslaved in Arabic countries who are powerless to articulate their plight to non-Arabic speaking Africans.

Therefore, if the African Diaspora were to unify under one language, all 1.3 Billion Blacks around the world would no longer be isolated from one another.

As an organization and a movement, our official language is Kiswahili – a language spoken by more than 140 million people in Africa and around the world.  Here are a few reasons why:

✅ On the African Continent, the Swahili language also shares similar pronunciation and vocabulary with local languages

African people have been divided by language, and swahili has the power to unify Africans globally.

Kiswahili Vs Swahili – Is There A Difference?

You might have noticed that we used the words swahili and kiswahili interchangeably above.

In case you were wondering – Yes – there is a difference between Swahili and Kiswahili!

The prefix “Ki” means “language of”, so putting ki+Swahili together we end up with “the language of Swahili”.

…But what does that mean?

As you learn Swahili, you might notice some words that sound Arabic or European in origin. Thats because the people of the coast interacted with foreigners, some words and phrases from Arabs and ‘Mzungu’ (whites) were added. But many African scholars have shown that the Swahili language came from a mixture of much older pure indigenous African languages.

Where Is Swahili Spoken?

Kiswahili was originally known as “Kingozi” before the 18th Century. When  Arabs and Portuguese arrived, they began calling the language ‘swahili’ – the Arab word for ‘coast’.

Kiswahili belongs to a larger family of ‘Bantu’ languages that are shown in pink on the map above. All Bantu languages came from the Western coast of the continent  near the present-day southwestern border of Nigeria and Cameroon.

Around 2,000 B.C. Swahili ancestors in that region moved from the west coast into the central regions of the continent before arriving in the Great Lakes of East Africa, where they set up permanent settlements. 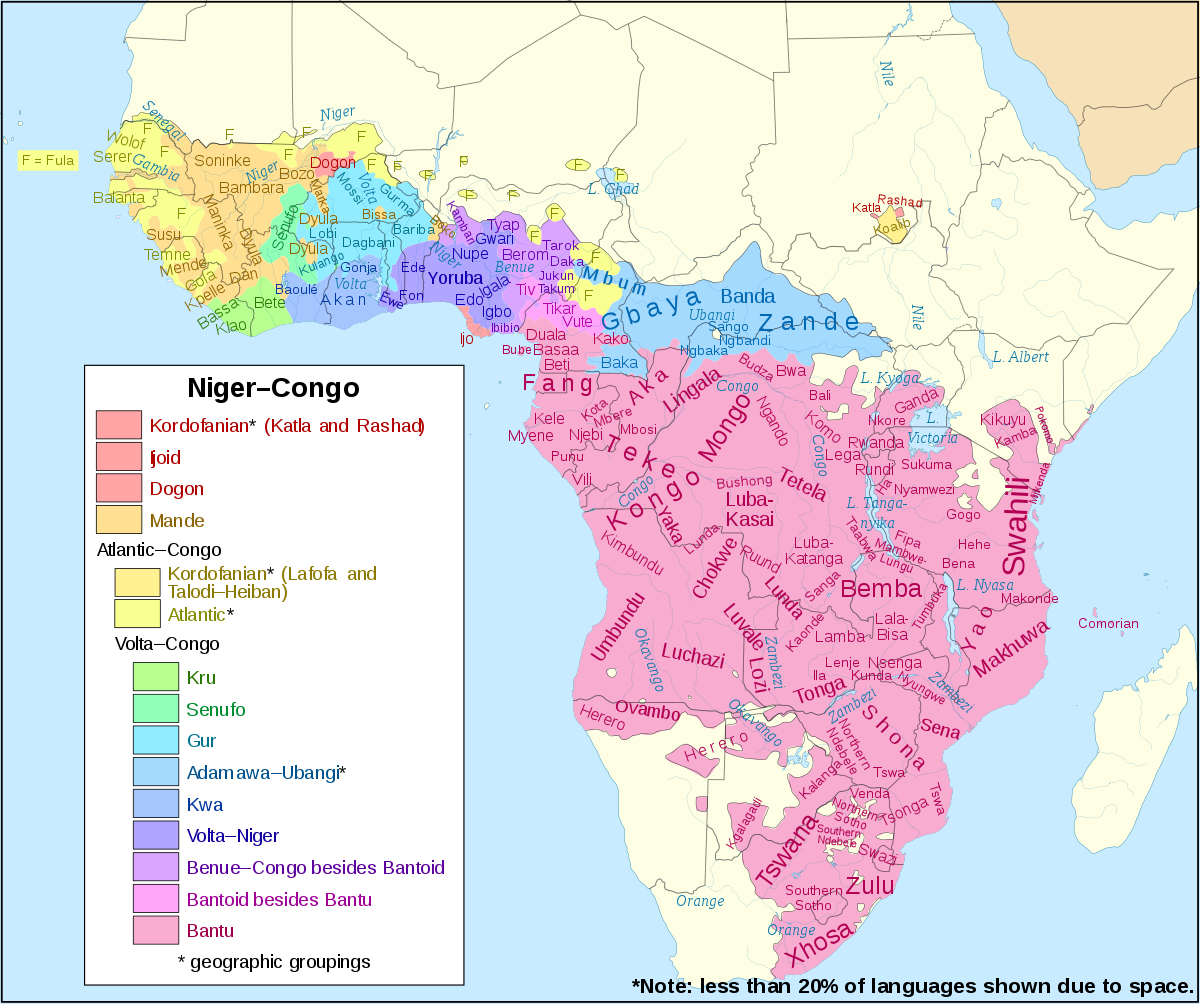 Today, the language has been kept alive in the region. Swahili is spoken in Ethiopia, Sudan, Uganda, Rwanda, Burundi, the Congo and Zambia, and is the most widely spoken African language.

In Kenya, most people generally speak a tribal language at home, use Swahili as an everyday language, and English for business.

Now that we have covered the ‘fun facts’, here are the best ways to learn Kiswahili online!

Learn Swahili With An Online Course For Beginners

The best way to learn Swahili if you are a beginner is with an introductory course. And not just any course – you need to take one taught by a native Swahili speaker!

In the past, that meant you had to get on a plane and walk up to strangers in Kenya to even hear the language. Today, we have online learning platforms that give you all the benefits of immersive learning without the cost of a plane ticket or college tuition!

The course I took was on Udemy. You can click here to check it out.

This is a great starter course taught by a native Swahili speaker living in Kenya. You get videos, you get to hear dialogues between two native speakers, and  you get downloadable flashcards that come with each lecture. By the end of the course, I was able to have a basic conversation with some other speakers without a problem.

Pro: The instructor does a great job at breaking down the language, pronunciation, and how to put sentences together.

Pro: The course is super cheap. Usually less than $20

Pro: I liked the fact that you get flashcards along with the video. I think we all used flash cards coming up so it gave me a familiar learning tool to work with.

Con: The course is cheap, but its also short. You will only learn enough to have a very basic  conversation. If you are learning Kiswahili to travel, this course wont get you very far.

Learn Swahili With A Mobile App

If you are constantly on the move, then using a mobile app to learn Swahili online might be right for you.

There are a million language apps our there today. I experimented with several of them to find the best one for learning Kiswahili. Some of the apps didnt make the cut because they were either only available on one platform (Android or  iOS). Other apps were hard to use or were so slow I wanted to smash my phone.

The app that covered all the bases for me was Duolingo.

Here are some of the pros and cons I ran into:

Pro: You can compete against your friends and learn Swahili as a group.

Con: Duolingo throws you right into the language. It doesnt explain why there is a “wa” versus an “m” prefix in front of a word. Plus there is no way to hear the right pronunciation. This is probably a big drawback for new learners, but will help you build your vocabulary either way.

Use A ‘Super-Learning’ Course To Learn Swahili Fast

This is the only Swahili course on the list that will take you from beginner to fluent speaker faster than any other course out there. I love the 17 minute language courses!

What makes this course a ‘superlearning’ course?

They use background music that taps into your brainwaves to help you focus, relax, and embed the lessons into your subconscious. You can turn the music off, but for me that made the difference.

The course also uses a “long term memory method” that helps you retain what you learn for the long run. It works the same way that children learn – using rhyme and repetition.

For example, do you remember the Kit-Kat theme song from the commercial? That commercial hasn’t been on for years, but you still have that stupid jingle in your head. 17 Languages uses the same technique to embed lessons into your subconscious so you can remember them without having to think about it!

Pro: You can use this course for travel and business Kiswahili.

Pro: The music really makes this course. I even listen to it when I am studying other topics!

Pro: This course covers all the bases – reading, pronunciation, and syntax, from beginner to advanced!

Con: More expensive than the other options on this list at about $50, but far more comprehensive with better tools for faster learning – so you get what you pay for.

Why Black History Is Filled With Agents And Informants

The Life And Assassination Of Patrice Lumumba

7 Free Black Audiobooks You Need In Your Life Right Now

78 Swahili Language Words And Phrases For The Classroom

Table of Contents No time to read? Listen to this article below! Anna Cooper - born Anna Julia Haywood to...