The Origin Of Things – A Poem by Listervelt Middleton

Listervelt Middleton made it his mission in life to educate African-Americans about their history and their contributions to society. Beginning in 1977, he hosted the South Carolina weekly television series “For The People” that offered a historical focus on African-American life; and used the show as a platform for African history scholars, anthropologists, archaeologists, and psychologists.

The show was so successful that it was aired in the Detroit, Memphis, Oakland, California, Minneapolis-St. Paul, Washington, Atlanta, Barbados, and Virginia markets.

When he wasn’t involved with “For The People”, Listervelt Middleton served as news director of radio station WOIC; and published three books of poetry: Fatback And Caviar, We Be Creosote People, and Southern Winds, African Breezes.

Mr. Middleton’s contribution to Black consciousness was so respected that in 1993, he was inducted into the South Carolina Black Hall of Fame.

He joined our ancestors on April 14, 1996, at the age of forty-five, and leaves us with this poem, entitled The Origin of Things. It is out of great reverence for this giant of Pan-African thought and being that we present his work to you.

The Origin of Things

Look around you black child
Your creation is everywhere
Though painted, distorted and given new names
They bear your prints just the same

For 110,000 years you were here alone
and then the Caucasion man was born
Behind the ice inside the cold
a chill set in this new mans soul.

Other minds have been credited
with the things they learned from you
Newton,Pyagoras, Kepler
and Galileo too

You made the serpent the the symbol of the healing arts
and African justice was Goddes Maat
Who weighed herself against the African soul,
truth and justice blindfold,

The George Washington monument is yours too
a copy of the Egyptian Tekenu
A symbol of the black world’s powers of creation
the black man’s penis means divine procreation!

Your god Osiris was restored to life
long before Buddah, long before Christ.
And today what you call the madonna and child
is but the first black family worshipped along the Nile

And when you feel the spirit [called] the Holy Ghost
you should know that it started at Abydos.
where god Osiris’ body was laid
the holy land where Africans prayed.

So sharpen your eyes
and tune your ear
so you’ll know what you see
understand what you hear!

from True of Voice: The Poetry of Listervelt Middleton. 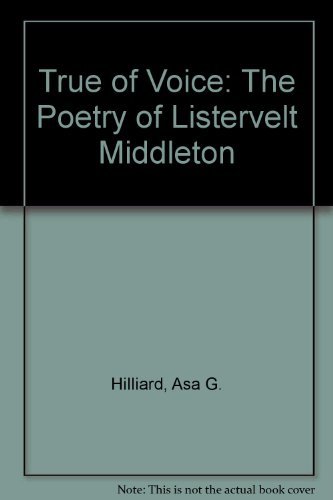 Pin
True of Voice: The Poetry of Listervelt Middleton
Add To Cart

The 10 Greatest Conscious Rappers of All Time

Hail! United States of Africa! – A Poem By Marcus Garvey

Reggae, Rastafari, and Pan-africanism – The Bob Marley You Dont Know

How Black Celebrities Became Weapons In The War on Black Culture