Marcus Garvey saved my life. At a time when I had just started to wake up, I heard the speech he delivered before facing his prison sentence in Atlanta.

That speech led me to seek out my first Enlightener and to establish United Black America – an organization that grew into the thousands.  The business lessons that Marcus Garvey taught me empowered me to start and sell two successful companies.

Many Black leaders and organizations come and go, but few have touched as many lives for the better as Marcus Garvey and the UNIA.

From Malcolm X and Kwame Nkrumah to anyone who has ever looked upon the red black and green flag, few have influenced as many people as our Ancestor. And it is for these reasons that you are about to read that none of us should ever forget who he was and what he has done for humanity.

This is his story.

In 1914, the messianic Marcus Garvey founded a global all Black organization. In the shadows of Reconstruction (following the American Civil War), he brought a message of self-reliance, self-determination, and racial pride that led to a mass movement unlike anything the world had ever seen. At its peak, the organization had a membership of more than 4 million well organized members and 1800 divisions in dozens of countries.

The Rise of the Universal Negro Improvement Association

Unlike many other Black organizations, the Universal Negro Improvement Association was global in its scope. Only 6 years after its founding, the first international convention held in New York’s Madison Square Garden drew 122 delegates and as many as 50,000 people from all over the world.

Most Black organizations are similar to churches – leaders give passionate speeches, collection plates are passed around, and that is the end of the story. Congregation members see little benefit outside of a sense of belonging. But the UNIA was different in this regard – Marcus Garvey was adamant about the Black community ‘doing for itself’ by establishing community based businesses supported by international suppliers from Black nations while also addressing Black unemployment. Here are some of the ways the organization practiced what it preached:

In January, 1918 the organization launched its newspaper, The Negro World. For a nickel, readers were able to read editorials from Marcus Garvey, Carter G. Woodson, and other contributors on current events, Black history, and opinions. At its peak, the paper reached a circulation of 500,000 weekly. According to Jomo Kenyatta, “Kenyans, unable to read, would gather around readers of Garvey’s newspaper, The Negro World. They would listen two or three times and run through the forest repeating the words they had memorized.”

The Black Star Line transportation company transported goods and cargo amongst black nations. The company was open to investors, and thousands of Blacks bought shares in the company.

Marcus Garvey created the Negro Factories Cooperative to “build and operate factories in the big industrial centers of the United States, Central America, the West Indies and Africa to manufacture every marketable commodity.” This led to the opening of grocery stores, restaurants, and publishing houses – all Black owned and operated.

Large auditoriums (called Liberty Halls) were purchased as both real estate investments and event facilities.
In 1924, the government of Liberia granted the Universal Negro Improvement Association 500 acres to develop and inhabit. This deal was later sabotaged by the Firestone Corporation.

In 1926, the Universal Negro Improvement Association opened a practical coeducational industrial school called Liberty University in Claremont, Virginia. The school property included several buildings and sixty-six acres of land along the St. James River. In December of 1937, The School of African Philosophy was also launched in Toronto to train UNIA leaders.

If The UNIA Was So Successful, What Happened?

“[He is] the most dangerous enemy of the Negro race in America and in the world. He is either a lunatic or a traitor.” – Dubois

Marcus Garvey was born in Jamaica but relocated to New York in 1916. New York is, and has always been, a hotbed of conflicting opinions in the Black community, and while Garvey’s movement exploded, his haters seethed on the sidelines. James Weldon Johnson – founder of the Harlem Renaissance movement loudly opposed Marcus Garvey’s separatist “Back to Africa” movement and instead urged the new Black communities in the northern cities to use their potentially powerful voting strength to force racial concessions from the country’s political establishment.

This led Randolph and Owen, the founders of the Harlem Renaissance Messenger Magazine, to also became strong and vocal critics of Garvey’s Black Nationalist philosophies.

But of all his haters, none were more destructive as W.E.B. DuBois, who called Garvey “a little, fat black man; ugly, but with intelligent eyes and a big head.” and “the most dangerous enemy of the Negro race in America and in the world.”

To understand the rivalry between DuBois and Garvey, one must understand the division between the integrationists and the separatists. Specifically, there has always been a division in the Pan-African Movement between those who advocated separation from white supremacy and those who wanted to integrate and seek concessions.

For the Negroes who sought concessions, Whites became valuable allies and supporters who would use their money and power as a proxy for control over Black organizations. This is how and why white Jews founded the National Association for the Advancement of Colored People (source). In exchange for their support, Black leaders would keep Black communities non-violent against white supremacy, or encourage them to ignore anything that would threaten the existing power structure.

For the Black leaders who refused to participate in the system of white supremacy, establishing a Pan-African state of their own was the only viable solution for realizing the full capacity of the Black race. This posed a threat to the global power structure – control of the labor, land, and resources of the Black world was concentrated in White hands.

To eliminate the threat that was Garvey, a dark alliance was formed between his critics in the Black community and the United States government. A number of African American leaders appealed to U.S. Attorney General Harry M. Daugherty to have Marcus Garvey incarcerated after Garvey’s meeting with the then leader of the Ku klux Klan, Edward Young Clarke.

On 14 October 1919, a Black man entered Garvey’s office with a .38-caliber revolver. He fired four shots, wounding Garvey in his right leg and scalp. Garvey survived, but would use a cane for the rest of his life.

In the book Negro With A Hat, it is alleged that the would-be assassin was hired by a government agent. He would later suspiciously fall to his death from the third tier of the Harlem jail as he was being taken to his arraignment.

Unsuccessful in their attempt to take Garvey’s life, his critics then attempted to murder his character. In 1922 DuBois and the leaders of the Harlem Renaissance started the “Garvey Must Go” campaign while appealing to the U.S. State Department (who then called him “an undesirable and indeed a very dangerous alien whose aim was to pit all the Negroes in the world against the white people”.)

Their appeals also caught the attention of an agent within the Bureau of Investigation named J. Edgar Hoover – the architect of the COINTEL program of surveillance and assassination. Agents of the bureau hired, trained, and used Black agents to collect evidence against and disrupt the UNIA.

Their efforts were successful, and Garvey was ultimately sentenced to 5 years imprisonment under mail fraud charges stemming from the Black Star Line investment program.

While in prison Garvey continued to publish works, but without his charismatic leadership at mass rallies, membership drives became rather ineffective. The leadership struggled to keep the movement together, but the damage had been done.

Garvey had gotten close to achieving the goal of an African homeland. The organization had the ships, the support, and the funding to relocate to Liberia. UNIA delegations to the nation had negotiated land agreements before Garvey’s arrest. But in his absence, the land he had acquired in Liberia was revoked when The Firestone Rubber Company opened one of the world’s biggest rubber plantations in Liberia.

Of this, Garvey wrote;

“The Firestone Rubber and Tire Company of Ohio has been spending large sums of money among certain people. The offer, no doubt, was so attractive as to cause certain persons to found the argument to destroy the Universal Negro Improvement Association, so as to favor the Firestone Rubber and Tire Company who, subsequently, got one million acres of Liberian land for actually nothing, to be exploited for rubber and minerals, and in the face of the fact that Liberia is one of the richest rubber countries in the world, an asset that should have been retained for the Liberian people and members of the black race”.

It has been historically reported that Garvey’s death was the result of suffering a stroke in January 1940 after reading his own obituary in the Chicago Defender which described him as “broke, alone and unpopular”.

However, there are rumors that Garvey was in fact poisoned on a boat on which he was traveling and that was where and how he actually died. A member of the media who was privy to the scheme to murder Marcus Garvey wrote and published the obituary in anticipation of the success of the plot.

It is the author’s opinion that Garvey died at the hands of assassins.

February 1924 – Garvey and the UNIA announce and implement the Liberian Colonization Program.

1926 – Garvey imprisoned in Atlanta. His interests in Liberia are lost when Firestone opened one of the world’s biggest rubber plantations in that same year

September 1929 – Marcus Garvey formed Jamaica’s Peoples Political Party, the first of its kind in the country, which set out a 14 point manifesto.

April 1931 – Garvey launched the Edelweiss Amusement Company to help local artists in Jamaica gain exposure and earn income. Festival programs featured plays, dance contests, boxing, and musical presentations. On Sundays, religious services were held, and Garvey himself wrote plays and poems for presentation at Edelweiss Park. Among his plays were, Slavery — from Hut to Mansion; Coronation of an African King and Roaming Jamaicans.

10 June 1940 – Marcus Garvey passes into legend. His remains are buried in London due to adverse travel conditions resulting from World War II

Look for me in the whirlwind or the storm, look for me all around you, for, with God’s grace, I shall come and bring with me countless millions of Black slaves who have died in America and the West Indies and the millions in Africa to aid you in the fight for liberty, freedom and life. – Marcus Garvey, 17 August 1887 – 10 June 1940 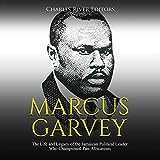 Pin
Marcus Garvey: The Life and Legacy of the Jamaican Political Leader Who Championed Pan-Africanism
$6.95 $5.99
Free With Audible Trial
Sale

Pin
The Marcus Garvey and Universal Negro Improvement…
(3)
$99.95
Add To Cart Or Save For Later

Pin
Philosophy and Opinions of Marcus Garvey [Volumes…
(413)
$18.50
Add To Cart Or Save For Later

Pin
MARCUS GARVEY AND THE VISION OF AFRICA
$9.99
Free With Kindle Unlimited

The History and Ideology of Azania’s Pan Africanist Congress