How To Eat To Live: 107 Foods That Will Feed Your Melanin

If you truly want to achieve consciousness, you might find that the easiest place to start is with the physical element. Your diet is the foundation of your strength, your quality of life, your energy level, and your direct connection with the Earth itself.

Radically changing our diet as a people may be the most revolutionary thing that we can do.

It is no secret that the African Diaspora faces health crises across the spectrum.Our people suffer from higher levels of infection and intoxication than any other racial group. From malnourishment and vitamin deficiencies to obesity and cancer prevalence, our people need a dietary intervention!

Plant based diets stand out as the most effective means of addressing this collective health crisis. Whether you are new to the Black Conscious community or a long practicing initiate, the resource that we have created here will give you the information you need to live a longer, stronger, and happier life.

The Philosophy Behind Our Plant Based Diet

Diet is more than just food on a plate. The diet of a people is an extension of their culture and a reflection of how their culture interacts with the world.

Some cultures emphasize a cruelty free culture with diets that avoid the use of animal products. Other cultures use religious guidelines to dictate their diet.

But what all these philosophies have in common are they use food as a resource to achieve very specific results.

As the Original People of the planet, we want a diet that

To meet those guidelines, we have developed a dietary philosophy and a practice that supports the mind, body, and spiritual awakening of melanated people. We call this philosophy and practice the Melanin Plant Based Diet.

The Melanin Plant Based Diet avoids most meat while eliminating pork, beef, and highly processed foods altogether. Instead, our plates are full of nutrient dense, non-GMO foods that are both high in fiber, antioxidants, vitamins and minerals and low in saturated fats.

All white foods – including white sugar, white rice, white flour, and white bread –  are eliminated from the Melanin Plant Based Diet. There are several reasons why:

Since 35 percent of all cancers can be attributed to diet, the easiest way to correct our collective condition is by changing the way we eat. As our ancestor Imhotep admonished us almost 5,000 years ago, our food must become our medicine!

Similar studies have also found that animal protein is packed with cholesterol that lead directly to heart attacks. This cholesterol stays in the bloodstream, and is only removed from the body with great difficulty, leading to countless health issues.

Yes – milk can cause osteoporosis! Here is how:

When humans consume cows milk, the body releases antibodies to fight the alien substance. Simultaneously, acid is dumped into the body that eats away at bone structure, thus causing degenerative bone diseases like osteoporosis later in life.

The details of these studies and others were published in his book titled The China Study: Revised and Expanded Edition: The Most Comprehensive Study of Nutrition Ever Conducted and the Startling Implications for Diet, Weight Loss, and Long-Term Health.  The New York Times called his book the greatest epidemiological study in the world.

According to the studies, safe proteins come from plant foods such as wheat and soybeans. These plant-derived proteins, even in high volumes, will still provide your body with life sustaining protein without the dangers of cancer causing meat.

The Positive Effects of A Plant Based Diet

The best way to determine whether a plant based diet is legit is by examining populations who live by the practice.

You might be surprised to hear that many of the diseases that exist in the Western world dont exist in Africa and Asia.

All of these amazing numbers are the direct result of cultures that embrace plant based diets.

Aside from the health benefits in humans, reducing demand for meat can do more to slow and perhaps reverse global climate change than taking every automobile on the entire planet off the street. Not only that, but reducing global demand for meat would free up enough grain to feed every mouth on the planet, every day, for an entire human lifespan!

With these guidelines and information in mind, here are the foods that form the foundation for the Melanin Plant Based Diet

Based on what we know of the eating habits of our original African cultures, we have created a plant-based diet that not only reverses infection in the body, but also increases energy, strength, and mental clarity.

Almost all of these foods can be purchased online for less than you would find at a chain grocery store. Click the button beneath any image to go to our full list of foods by category. 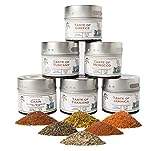 Suzie’s Spelt Organic Puffed Cakes, Agave…
(42)
Add To Cart Or Save For Later

If you know of any Black owned businesses that produce any of the above, leave a comment below with a link to their product. We will update the list above as we find more suppliers!

Eat To Live: Everything You Need To Know About Hemp seed Oil

The Teachings Of Dr Sebi

Table of Contents We have written alot about the benefits of sea moss for men, but there are an equal...

7 Dr Sebi Herbs That Will Keep Your Immune System Strong

The 3 Deadly Venoms of the Black Diet