All honors and rights belong to Nigeria's Lakin Ogunbanwo for this stunning photograph.

We Members of the Pan-African Movement and the Black Conscious Community have started to lose our way. Marcus Garvey warned us to “let cross opinions go to the wind”, yet today there are thousands of Influencers and organizations creating more confusion than ever.

But the two most destructive arguments are over who we are and where we are heading collectively. Specifically, are we Black? Moorish? Ghanaian? Are we Leftists? Capitalists? Republicans?

Others may argue that race is a social construct, or that declaring a false nationality – or no nationality at all – will save us.

Race Is Real and We Are Black

For decades the Black community has argued over its identity. Unfortunately, race has been confused with ethnicity and nationality. Every student of Pan-Africanism must be able to articulate the difference between the three, and this article provides a foundation for that knowledge.

Our Hair Is Our Antenna To The Universe

Every Barber and Beautician learns the differences between hair types as part of their basic training. These differences are illustrated below.

Regardless of opinion, the science is clear when it comes to the unique differences that Black hair types possess. And this difference is just one of many physical factors that set the Black race apart from others.

Your Skin Is Blessed By The Sun

Black skin is uniquely different from that of any other group. Every student of Black Consciousness has (or should have) read the scroll Melanin: What Makes Black People Black by Baba Llaila Afrika. But for those who have not, the book describes these special properties in detail. 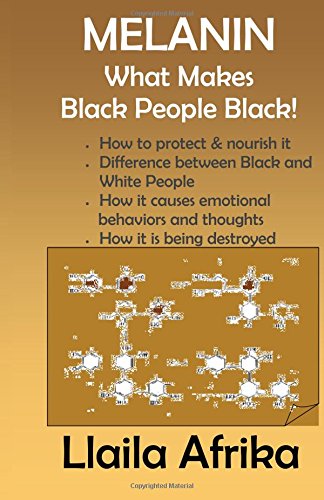 In short, the skin pigment melanin is produced by special skin cells called melanocytes to protect, absorb, and harness the energy of the rays of the sun.

White Scientists acknowledge Black skin tone as part of the distinct racial makeup that makes us different from others.

…evolutionarily two lines of human skin pigmentation were produced by natural selection based on UV radiation- one at the equator with darker skin pigmentation and the second with depigmented skin in response to lower UVB availability and its requirement for vitamin D photosynthesis. In a detailed discussion of the effects of UV on folate, which is essential for cell division, DNA repair and melanogenesis, these authors propose that photolysis of folate directly by UVA and depletion of folate by ROS may have played a role in evolution of pigmentation. – Source

The distinct difference between our skin tone and that of other groups is the reason we are profiled and subjected to bias.

According to the Huffington Post, Professors at San Francisco State University released a study titled “When an ‘Educated’ Black Man Becomes Lighter in the Mind’s Eye”exploring a concept they call “skin tone memory bias.”

In the experiments, students were subliminally shown one of two words -– “ignorant” or “educated” — followed by a photo of a black man’s face. They were then shown seven photos with the same face with varying skin tones ranging from light to dark. The original photo they were shown was also included in the selection. Three photos were darker to varying degrees and three photos were lighter to varying degrees. After being shown these photos, participants were asked to identify the original photo they were shown.

The results showed participants who were shown the word “educated” had more memory errors and often chose the photos with a lighter skin-tone when asked to recall the face they originally saw.

If race was a social construct rather than a physical reality, there would not be a conscious bias against dark skin.

The Black Body Is Built For Performance

There is a reason why the greatest athletes in history have all been Black – and it has everything to do with differences between our physiology and that of other racial groups.

The following comes from Live Science:

“There is a whole body of evidence showing that there are distinct differences in body types among Blacks and whites,” said researcher Edward Jones, who researches adolescent obesity, nutrition and body composition at Howard University. “These are real patterns being described here. Whether the fastest sprinters are Jamaican, African or Canadian, most of them can be traced back generally to Western Africa.”

If race was a non-existent/social construct, these three physical differences would not exist. Anyone who tries to convince you that something is not real – despite the fact that you can see it, touch it, and feel it – is trying to confuse or deceive you.

We can no longer afford to be divided by deception. Regardless of what we call ourselves, it is time that we came to understand that we share a common enemy and a common heritage.

Divide and conquer has been a tactic used since the dawn of warfare. Not only has the Black community been divided along lines of racial identity, we have allowed other movements to take advantage of our differences of opinion for their own gain.

In the United States, Black Civil Rights movement worked to improve conditions for the Black community. From Reconstruction after the Civil War up to the Black Power era of the 60s and 70s, Black children faced police dogs, Black men were lynched en masse, and Black women organized our communities while facing the weapons of white supremacy on their own.

During these days, other groups offered very little support to the Black struggle or Pan-African Movement.

Where white women aimed to be treated as equals amongst their husbands, fathers, brothers, and sons, Black women were aiming to give voice to the entirety of the Black community. And when it came time for white women to gain voting rights through virtue of white personhood they left Black women to fight for themselves while simultaneously villainizing Black men as violent rapists.

And the same groups that were loathe to associate with the oppressed masses were happy to call themselves minorities to take advantage of Affirmative Action programs in much the same way that early American settlers claimed Native blood to receive federal grant money.

Even today, LGBTQ groups are working to change the focus of reparations from the Black community to their own. Even Presidential Frontrunner Elizabeth Warren supports the idea of giving gays reparations whole-heartedly.

The student of Pan-Africanism recognizes that every non-Black group – be they the Chinese and Lebanese in Africa or the LGBTQ movement in the United States – works in their own interest.

The blood of Black men, women, and children fertilize the roots of the tree of liberty while other groups enjoy the fruit of our sacrifice.

Presenting A Unified Front Across The Pan-African Movement

With the understanding that we are all unified by the precious ties of blood, and that there are no other groups working in our best interest, we must collectively embrace the lessons passed down to us by the founding Ancestors of the Pan-African Movement.

Every tactic that we employ – be it reparations, protesting, business building, civil disobedience, boycotting, and organizing must support Black sovereignty and Black liberation.

Pan-Africanism is the future. There can be no Black liberation without a Black nation. Democracy will not work for our people in any nation where we are not the majority. As it has been said – Democracy is two wolves and one sheep voting on what to have for dinner.

How we approach these topics is not as important as the intentions we bring to the discussion. We dont have to be uniformed in our opinions to be unified in our intentions. We can argue about the details in private, but above all else we must present a unified front in public.

For the next 1,000 years our position must remain clear: We build, work, and organize for the unification of the African Diaspora. Our people are our first priority.

We are Black. And we are Pan-Africans. End of debate.