Why The Birth Of South Sudan Was 5,000 Years In The Making

On July 9, 2011 a new nation was born. South Sudan became the world’s youngest democracy and joined the African Union as its 54th member state.

But the reason South Sudan voted overwhelmingly to split from Sudan was thousands of years in the making. Independence was the latest chapter in a centuries long war that began in old Kemet.

South Sudan History and the Destruction of Black Civilization

In his book, The Destruction of Black Civilization, Dr. Chancellor Williams tells the story of how for thousands of years, the Nile valley was a battleground between the Original Blacks of the land and the Arab invaders seeking to conquer it. 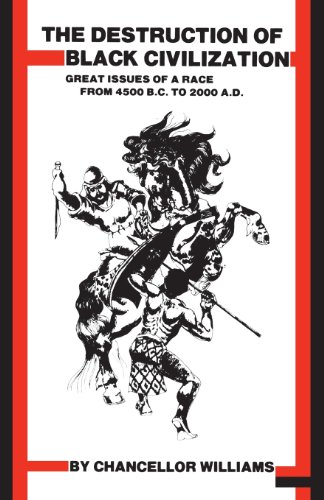 Prior to 3150 B.C., Kemet was divided into two lands. The Northern lands (Lower Kemet) were contested by several dozen ethnic groups fleeing the encroachment of the Sahara desert and invading Africa from the Middle East.

It was the Black Kemetic Suten (King) Menes who would defeat the Arabs, unite the North and South, and bring all of Kemet under Black rule. The Suten’s victory over the Arabs ushered in more than 3,000 years of the greatest Black Civilization in history.

The original people who fled old Kemet would continue fighting, even as they were pushed further and further south.

“Africans battled the invading Asians decade after decade and century after century… their resistance to conquest and enslavement extended for over four thousand years.”

Fleeing the Arab invasions that began in earnest around 785 B.C., the Black people of the Nile re-established their empire in what would come to be known as the Kingdom of Kush.

Nubia Kush – The Land Before Sudan

Before the arrival of Arabs and whites, there was only one kingdom – Kush – that existed in the area that was then called Nubia.

For more than 1,000 years, The Nubians of Kush preserved the knowledge and culture of their stolen lands to the north. Their capital city of Meroe, for instance, was marked by more than two hundred pyramids – three times as many as in Kemet itself! The Kings of Kush would even reclaim Kemet and become the Suten of 100+ year long 25th Dynasty under legendary names like Piankhi and Shabakka.

But after centuries of combat, the Black hold over Kemet came to an end in 644 B.C. From then until the 19th Century, the Nubia Kush would endure enemies both foreign and domestic. All the while preserving the old culture it had lost.

Arab Egyptians would continue their centuries old bloodlust when, in 1851, they would force open the region to white exploitation.

The British took advantage of the Muslim – Black conflict. Following their age-old blueprint of divide and conquer, the British supported the Muslim war against the Nilotes and declared the Sudan a ‘Protectorate’ (colony) in 1899.

Both Britain and Muslim Egypt occupied the region and forced the Black Sudanese to accept the rule of the new Anglo-Egyptian regime. For the next 33 years, all of Sudan remained under colonial control.

During this period of colonial control, the Blacks of Sudan resisted, launching a civil war of liberation during the First Sudanese Civil War (1955–1972) followed by ethnic, religious and economic conflicts between the Muslim Arab northern Sudanese and the Black Nilotes of Southern Sudan.

For an extended account of this period, here are 4 important books that cover the history of South Sudan in depth.

The struggle continued until South Sudan finally won its fight liberation on July 9, 2011

We would love to write that with the birth of the nation of South Sudan, the threat from the Arab invaders came to an end.

However On April 24 2012 – less than a year after independence – the Arab controlled Sudan declared war on Black South Sudan. From the U.K. Telegraph:

On a visit to China, Salva Kiir, South Sudan’s president, told his counterpart, Hu Jintao, that, “[my visit] comes at a very critical moment … because our neighbour in Khartoum has declared war on the Republic of South Sudan”.

Eight bombs were dropped on areas south of the countries’ disputed border late on Monday night, South Sudanese officials said yesterday. The extent of the casualties was not immediately clear.

“The continued attack on the civilian settlements is no longer just an aggression, it is becoming a clear human rights violation,” said Biel Boutros, executive director of the South Sudan Human Rights Association.

If there is one lesson we Africans must learn it is this: those who fail to learn from their history are doomed to repeat it.

If South Sudan’s Black neighbors turn a blind eye to the plight of their Sister nation, it is only a matter of time before the Arabs are at their borders.

Like most nations, South Sudan adopted the red, black, and green flag as part of their standard.

The flag was accepted after the signing of the Comprehensive Peace Agreement that ended the Second Sudanese Civil War.

The flag was previously used as the flag of the Sudan People’s Liberation Movement – a Black organization that was instrumental in winning independence.

The People of South Sudan

South Sudan has always been populated by ethnic groups that lived in relative peace and harmony until the arrival of whites and Arabs. These groups are collectively known as the Nilotic peoples and are the descendants of the founders of Kemet.

The word Nilote itself is a word derived from the word Nile, indicating that these people were the original inhabitants of the area. These ethnic groups include the following:

While we celebrate July 9th as South Sudan’s Independence Day, we must understand this: The struggle in the Sudan today is a struggle between Black and White. Between Muslim and Christian. Between colonialism and independence.