This Might Be The Ultimate Black History Trivia Book

The Ultimate Black History Trivia Book by Curtis Claytor has two thousand multiple choice questions and answers in four categories: History; Music; Sports; Television, Arts & Literature! Most of us learn in school about Martin Luther King, Jr., Harriet Tubman, and George Washington Carver. But who was the woman who refused to sit in the Jim Crow section of a train in 1883 or the name of the Black man who invented the gas mask and the three-signal stoplight? Not only will one learn about inventors and the heroes of the black struggle; one will learn about the horrific racial violence that is seldom mentioned in history books.

Black trivia enthusiasts will learn the answers to a variety of questions like who scored 101 points in the first half of a high school basketball game, Fred Sanford’s middle initial, and when the freaks come out according to the Whodini song.

In the fascinating and entertaining book, Curtis Claytor invites you to test and increase your knowledge of black history and celebrate the achievements of not only the well known African- Americans but also the lesser known.

Here’s what reviewers are saying:

“The range, organization, solid research, and respect for fun underpinning this book make it a good choice for families, students, libraries, and anyone else who wants to deepen their knowledge base and brush up on African American history. An extensive list of sources includes a bibliography of books, magazines, newspaper articles and websites.” — Clarion Review

“The trivia guru/ African American historian has spent countless hours researching and compiling the 2000 trivia questions that fill this engaging and entertaining book. The Ultimate Black History Trivia Book can provide hours of fun, but also has practical applications: Claytor’s research will settle generations of household disputes and misinformation, and educators can unitize its content to punctuate overlooked or marginalized African American history figures and events. Questions can also be used as quiz material.” — Blue Ink Review

The books is available in both paperback and ebook versions that you can get below. 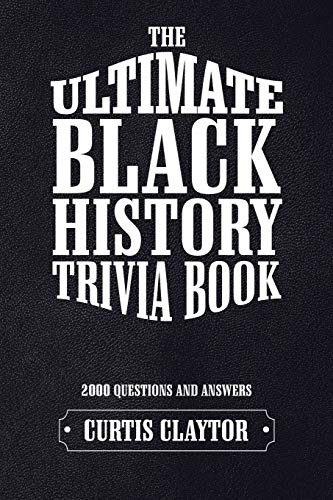