The research used to write this article was adopted from the book Amazons of Black Sparta: The Women Warriors of Dahomey. You can find copies of the rare book below. 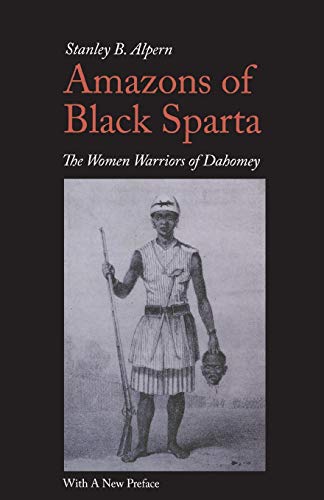 The Black Spartans of Dahomey were one of history’s most fearsome warrior class. But unlike the Samurai of Japan, the Knights of Europe, or the Immortals of Persia, this was an all woman Army.

The Legend of Dahomey

The Spartans of Dahomey traced their lineage back to the Allada Kingdom of the 11th or 12th Century. Around the year 1600, three brothers got into an argument and separated themselves into three kingdoms. One of the brothers, Do-Aklin, left the area to create the Abomey community. Within 100 years, Abomey controlled the commercially valuable coast along the Bight of Benin.

From the very start, the Kingdom of Dahomey was violent. Legend has it that the second King of the Abomey community requested permission from a local chief to build the capital of their nation on his land. The chief responded sarcastically “Should I open up my belly and build you a house in it?” For this insult, the King killed the chief and began the construction of his palace on the spot. That is where the name Dahomey came from. In the local language, Da means chief,  xo means belly, and me means inside of.

By 1645, the Kingdom of Dahomey was in full savage mode – raiding nearby villages and forcing them into the new kingdom. It was these early raids, pressures from larger nearby kingdoms (like the Songhay), and the presence of white slave traders that forged the Dahomean warrior spirit.

The numbers were never on the side of the Kingdom (their army was only 10,000 deep in the early 1700’s), but what they lacked in size they made up for with experience, martial spirit, and the deployment of weapons and tactics. Every member of the Dahomean military was skilled in knife and sword fighting, musketry, and hand to hand combat.

Because the nation was small in number, everyone – both the men and the women – were expected to bear arms for the King. Even children as young as seven would carry the shields of older warriors into battle for them.  Warriors were paid for each person they killed in battle.

The Training and Status of the Ahosi

Early on, the women of Dahomey served their nation as elephant hunters in all-women units called gbeto. Later, they became armed palace guards and would be used on the battlefield to fill out the number of male troops.

Those women who did participate in battle proved so courageous and vicious that they were organized into a permanent all-woman unit.  In 1645, King Ada Honzoo expanded that unit to almost 4,000 women divided into two battalions.

The first battalion, called the Elephant Crushers, were armed with rifles and cannon purchased from European slave traders (thanks to gold and palm oil sales). The second battalion – the Reapers – was the most terrifying. They preferred the up close kill, and traded rifles for machetes that they would swing with both hands, cutting their victims clean in half.

Just like their male counterparts, training for the women warriors started early and was brutal. Like the males, women were recruited as young as 7. Once a woman became a member of the military, she was off limits. She became known as a member of the ahosi – the Kings Wives. Sex and pregnancy was forbidden, and anyone laying a hand on one of the ahosi were condemned to death immediately.

The training the women endured was designed to increase their aggression and fighting spirit. Training exercises included:

Once women completed training, their reward was a belt of thorns that they would wear for the rest of their lives.

“If soldiers go to war they should conquer or die.” – Motto of the Women Warriors of Dahomey

Thanks to the combat effectiveness of their training, the women warriors led the tiny Kingdom of Dahomey into a  a powerful regional force. They conquered the Kingdoms of Savi and Whydah in 1727. They crushed the Allada kingdom that they had separated from more than 100 years earlier. In one battle, the women collected so many skulls (which is how you got paid) that the King of Dahomey built a throne out of them.

The wealth and reputation of the women gave them important positions in government and they became close advisors to the king once they retired.

The Fall of the Kingdom of Dahomey

As is always the case, Europeans arrived in the region first as traders and as missionaries. In 1851, the French signed a treaty with the Kingdom to operate within their borders as traders. The French then took control of the port of Cotonou which infuriated King Béhanzin. On March 4, 1890, 4,000 women warriors descended on the port right before sunrise and rained hell down on the French in what came to be known as the Battle of Cotonou.

During the battle, a French soldier wrote about seeing his best friend decapitated with one swing of a machete by one of the women who then dropped her weapon, grabbed another Frenchman and ripped out his throat with her teeth.

It took more than 25 battles and 4 years, but the Kingdom of Dahomey was eventually conquered and disbanded by the French in 1894.

At the end of the war, only 50 out of 4,000 Dahomey Amazons had survived. The rest had sacrificed themselves fearlessly in battle. The last survivor of the Dahomey Amazons was a woman named Nawi who, in a 1978 interview with a Beninese historian, claimed to have fought the French in 1892. She died just a year after being interviewed.

To this day, the Dahomey Amazons are the only documented all-female official front-line combat arms military unit in modern history.