by Asad
in Black History, The Academic Element
2

In 1581, Yasuke – whose name means ‘the Black one’ in Japanese – became the first Black Samurai in Japan and the first foreign Samurai in Japan. Tall, powerful, and with skin as Black as night, Yasuke earned the admiration of a powerful clan leader who would change the course of Japanese history.

Legend has it that the man we call Yasuke came from the Habshi people of present-day Ethiopia. This group was known for their powerful physical stature and their fighting abilities. And this was the same group that produced Shahzada Khoja Barbak – the Ethiopian that conquered the Bengal Kingdom and established the Habshi dynasty in India 1487.

We dont know much about the early life of Yasuke, but we do know that he was a victim of the slave trade. Using technology that was captured from the Black Moors in Spain, Portuguese slavers swarmed out of Europe starting in 1512 and attacked Africans around the coasts of the continent.

By 1579, the Portuguese had circled the African continent and used captured Black slaves to expand their trade routes all the way to Japan.

Yasuke was one of thousands forced from his homeland by missionaries. He was taken to Japan in 1579 where he spent two years learning the Japanese language while being exploited by an Italian Jesuit.

How Yasuke Rose From Slave To Samurai

White slavers may have thought they were all-powerful, but in 16th century Japan it was the clan leaders whose word was law.

One such clan leader was Lord Oda Nobunaga. When the Portuguese and Yasuke arrived, Japan was in the middle of a period marred by social upheaval and near-constant civil war. Nobunaga made it his mission to unify Japan under one banner and restore peace and stability to Japan.

Yasuke’s presence caused a stir across the Japanese countryside. Most Asians had never seen a foreigner, let alone a man as Black as charcoal who towered over others – sources cite Yasuke’s height at 6 foot 2 during a time when the average height of whites and Asians were less than 5 foot 5 (1).

Stories of Yasuke’s imposing figure reached Lord Nobunaga who ordered the man to present himself. When Nobunaga laid eyes on him, he was so stunned by the man’s ink colored skin that he ordered Yasuke to strip and scrub himself.

Since Yasuke spoke Japanese and had a well-mannered disposition, Nobunaga offered Yasuke a position. Nobunaga would need powerful warriors near him, and none were as physically capable as Yasuke.

And so at that moment in 1581, Yasuke became the first African Samurai in history. He was gifted land, a sword, and a position at Nobunaga’s side.

Nobunaga and Yasuke would fight side by side for almost two years, winning multiple battles and changing the course of Japanese history.

What Happened To Yasuke?

In 1582, Lord Nobunaga was betrayed by one of his allies. The traitor and his co-conspirators surrounded a temple where Nobunaga was attending a tea ceremony and attempted to burn the structure down with him trapped inside.

When Nobunaga realized what had happened, he took his own life instead of allowing himself to be killed by an enemy.

Nobunaga believed he was safe at the ceremony, so he had left the majority of his forces behind. He bought 2000 warriors with him, and Yasuke was one of them. While Nobunaga drew his last breaths inside the temple, Yasuke and the other Samurai fought ferociously to avenge their leader.

When the group realized they were outnumbered, Yasuke led them to the home of the next in command – Nobunaga’s son Nobunata. The situation developed so quickly that Nobunata did not have time to adequately rally his fathers forces, and the same group that had ambushed Nobunaga turned their attack to Nobunata.

In a matter of moments Nobunata and his forces were defeated. In the chaos, Yasuke was captured. The attackers did not kill Yasuke because they saw him as an animal who was foreign property. They led back to a Christian church, and handed over to the whites there.

Yasuke was never seen or heard from again, and we do not know what became of him.

Nobunaga represented the beginning of the end of an ugly Japanese civil war. Towards the end of his life he came close to realizing his dream of a unified nation, and he could not have done it without the help of Yasuke.

The Legend of the African Samurai Lives On

As more Black history comes to light, the world is giving more respect to figures like Yasuke. African Samurai: The True Story of Yasuke, a Legendary Black Warrior in Feudal Japan takes a deep academic approach to understanding who Yasuke really was and his impact on Japanese history and culture. 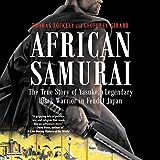 Black Panther star Chadwick Boseman is set to play Yasuke in a film scheduled to be released in 2020. As more details are released we will update this article.

If you cant wait until then, there are countless pop culture series that tell the story of the first Black Samurai. Netflix is currently producing one, and there are several on Japanese streaming video services

Yasuke the Black Samurai is yet another example of how Black history extends much farther back in time than modern civil rights movements. Black women and men have shaped the course of world history and deserve a place of honor in the history books of every nation on Earth.

Askia The Great: The Man Who Transformed Songhai Into An African Superpower

What Are The 5 Elements Of Your Life And What Do They Mean?